Portland. This Portland is in Oregon. Oregon is the 18th State of the

only surpassed by Montana. With a population of 3.2 million (ranking 11th out

of our 18) the population density is only 33 people per square mile. Oregon

is also the 4th State with a top elevation over 10,000 feet. Mount Hood

That same English admiral, Drake, who was poking around the Washington

coast in 1579, hit the Oregon coast as well. Ignoring the people who already

lived there, he graciously presented the area to Queen Elizabeth. She was a

bit far away from it all so decided not to move. The first permanent (white)

stroll from Missouri lasted for about 30 years during which 300,000 people

for a good time.

were part of the Oregon Territory; however, Oregon became the 33rd State 30

years before its neighbor to the north was admitted to the Union. (More

Washington trivia: it was supposed to be called Columbia, but, because some

Washington, instead. Now, Washington, the State, is often confused with

Oregon trivia. Oregon City (just south of Portland. I looked it up) was

the first incorporated city west of the Rockies. Crater Lake at 1,932 feet

deep is the deepest in the U.S., and a great sight if you get the chance.

Portland claims the smallest park in the world. Mills Ends Park is 24 square

inches. No. I wrote that correctly, square inches. For some reason in all my

trips to Portland, I've managed to overlook it. Oh. And even though Oregon is

very progressive in many ways, it is only one of two States, I believe, that

Friday night the 1st, Dorothea and I went over to PIR to pick up our ABFM

preregistration packet for EG. Several other Minis were there and we stayed

and chatted with old friends. Rumors were that 80 Minis had preregistered

which meant that more than that should be on hand for the next day. That

would mean that the Mini turnout would be at least as great as 1988, if not

more, when the West Coast Mini Meet was held in conjunction with the ABFM.

helped, of course, that the sponsoring Jaguar club had chosen the Mini and

Morgan as the featured marques this year.

On the way back to the hotel we stopped to put gas in EG. The station had

attendant was still inside cowering, so I was able to pump my own gas before

he recovered. Mini tanks, with their short necks, don't lend themselves to

The next morning I was up very early cleaning EG. Off came the remaining

dirt (the rain had taken care of much of it) and bugs. On went a good coat of

wax. The inside was vacuumed and she was made to look just like some of the

trailer queens. Did anyone buy that? Didn't think so. EG spent about 5,800

holding her grille high and looking like a real car, not a museum piece.

(Besides, it had rained that night and it was certainly going to rain again

during the day. Why bother?!)

field from 8 am until 10. Others allowed after 10. For all but Jaguars, there

would be only a Peoples' Choice type voting. (Jags also were there for

national points judging.) LandRover of Portland was sponsoring their annual

off-road "jungle" course. There were some sales booths open (Mini Mania was

before), and there was a photo contest going on. The awards were to be

presented at 3 pm and at 5 there was to be a BBQ and raffle.

organization in place. The Jag club has been doing this for years and it

shows. We were directed to the area for our group of Minis (Variant: Moke,

Riley, Wolseley, Radford). Actually, EG was a bit of a variant, variant and

really wasn't a "British" car at all. We snuck in anyway and no one

The start of the line up of "Variants"
at the ABFM. Nearest

to the camera is the Pegues' Radford. Next is Barry
Kop's Hornet,

then EG (still with roof rack, dirt and bugs!), and Jeff
William's Moke.

Many more were to come. The Moke took first in the balloting

if I remember
correctly.

admiring the work put into them and the great variety of modifications. It

was hard to find "stock" examples! As a group, the Estates were probably the

beneficiaries of much time, money and devotion (and few road miles). I never

counted more than 74 Minis on the field, but with all the comings and goings

parking. I took a few photos, but it was hard to get good ones. Between rain

talking with people about the unusual EG, I didn't spend lots of time behind

the camera. A few photos follow. Check out Mini Mania's Event's Section for

The best I could do with a photo of

the Minis at the ABFM, and I had to climb a wire fence to get this one! 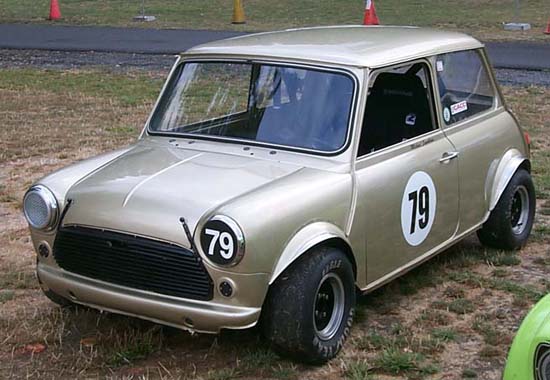 One of the cars in the Modified class,

Michael Sandham's autocrosser. Seeing this car was a bit of a flashback and

nightmare at the same time! I'm sure this was once owned by Dave Gray from

Canada. In the early 70s when I was still autocrossing, I usually had a good

chance of placing first in class; except, when Dave would show up. He was as

good as any I'd ever seen and his was a very well prepared car. When Dave

made one of his infrequent appearances (fortunately!) south of the border I

resigned myself to competing for 2nd that day.

A word here about the Oregon Mini Society. They put up a great display

writing a good article for the participant's magazine). They had a kiosk with

that photo of the Wildgoose, and I forgave them for leaving South Africa off

the map as one of the places where Minis were made). And around the kiosk

explaining the cars to the uninitiated. Great job. If this bit of

handle Mini Meet West 2001, it should be a great event. 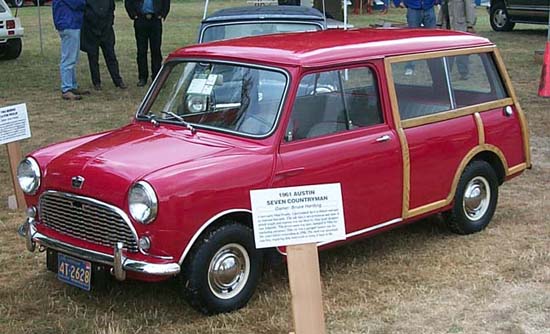 The display 1961
Countryman of Kerri and Bruce Harding. 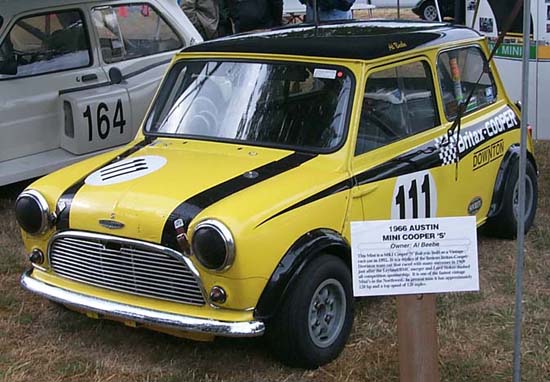 A racecar on display, Al Bebee's

Britax replica. British Car Magazine was at the event and interviewed Al.

Look for a future article on the event and about Al and his car. 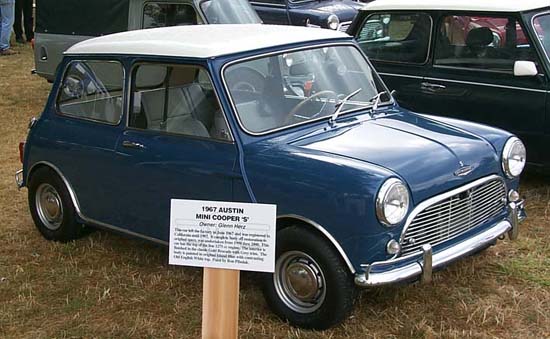 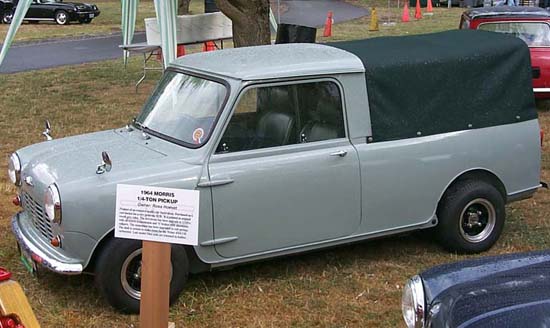 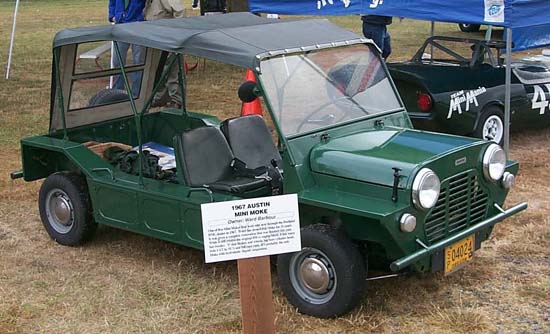 Display Moke of Ward Barbour. (I
saved my favorite Mini type to last!)

Hidden underneath this Moke is
hydrolastic suspension.

The next one is of my favorite photo in the photo contest. Remember that

the event is sponsored by the Jaguar Club. I still laugh every time I see 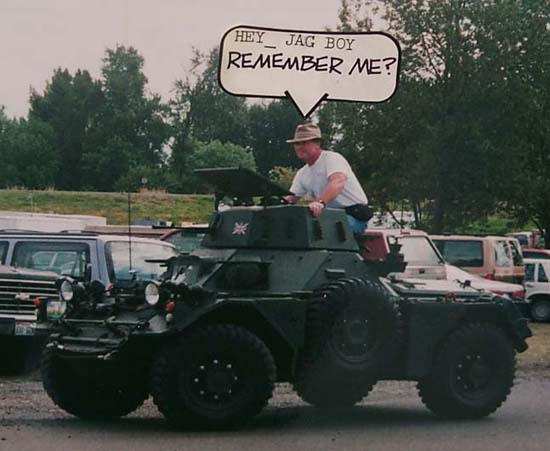 Hope you enjoy this one as much as I
did!

(especially Minis) to look at. If I have any complaints it is the same one I

have at all British meets in the US. There are always many great examples of

British sports cars (and, as is traditional at this meet, many Land Rovers),

but other than Minis and Minors, where are the cars that one would really see

on the roads in England. Were are all the cars that "real" people purchased?

US meets are very different from those in England.

her friends to do some shopping and head for the sights of Portland. By the

end of the day, I had dodged in and out of enough rain showers and talked

with enough people, that I skipped the BBQ (VERY unlikely to be the good BBQ

I'd chased all over the country!) and headed back to the hotel for an early

My favorite Mini of the Meet? There are too many good ones to chose from,

but one that sticks out in my mind was a standard, late 70s Canadian car,

complete with the ugly bumpers. It was in very good, stock condition, and

looked like it had been used once or twice. There were better cars there,

probably, but this one wasn't over-restored (yes, folks, even Minis have

fallen prey to that bug), and looked like it got used once in a while.

Another car stood out to me, but it wasn't until Sunday that I really took

Sunday morning September 3rd, we returned to the field and spent some

time wandering around the swap meet and looking at all the goodies for sale.

I didn't find any Mini parts I wanted (and felt I could afford!), but I did

come up with a couple of models and some literature to add to the collection.

There were good cars for sale and some at reasonable prices. A couple I would

have liked to take home, but they wouldn't fit on the roof rack, and EG might

Eventually, we headed over to the autocross to watch the runs (and dream

of the "good ol' days"). By this time the sun had come out enough that it was

of the SE, however) and several of us sat in the bleachers overlooking Turn

Nine, the beginning of the straight and the drag strip. A course had been

laid out that looked to favor the bigger horsepower cars, but turned out to

be one that required a good balance of handling and driver skill as well.

The Minis performed fantastically and were faster than all but two cars.

It was here that I saw the other car that I remember so well. Some very hot

cars, including Minis had lowered the run time to about 53 seconds. Then a

flares. No fancy paint job. And, as I found out later, driven down from

Canada - didn't show up on a trailer. All it did was lower the time to about

51 seconds. A nice car driven very well. Wish I could give credit to the

owner, but I didn't get his name! Eventually, one well-prepared Jag E-Type

coupe and a Sunbeam Tiger lowered the time to about 50 seconds.

The last group to run contained the two cars of the Sandham's: Larry's

Vauxhall engined funny car, and the previously mentioned car of Michael. It

sink into their cars to get them to compete with the Minis. Eventually,

Michael took the top honors with a time in the low 47s, about 3 seconds

Shortly thereafter, it was all over for us, too. We headed back to the

hotel to contemplate the next day's drive. It wasn't straight back home. EG,

Discovery to the Pacific.